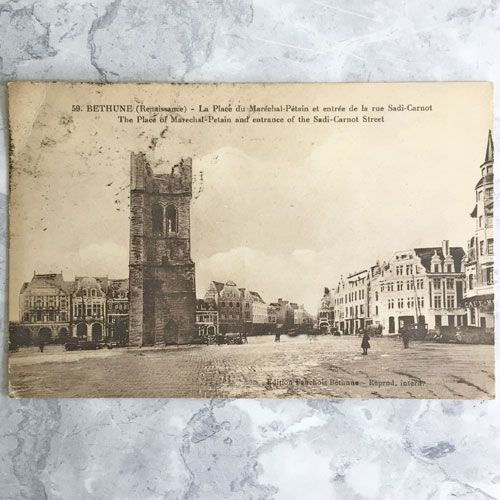 0 in your basket
View Basket Checkout

This vintage postcard has a black and white image of the main square at Bethune in France, with the belfry prominant near the middle.

At the top the postcard has text in French and English which reads:

The Place of Marechal-Petain and entrance of the Sadi-Carnot Street".

On the back are three French stamps in blue, and a written message addressed to Mrs Capell of Northampton, which reads:

I got across in great style. Emile met me at Calais in his car, and brought me home via Paris -Plage. Everything in the garden is lovely, more by letter. - H."

There are two postmarks over the stamps but it's difficult to tell if the year is 1920 or 1928.

Recommend this to a friend  +