The arrival of a healthy male heir is an essential moment for any monarchy, but it's not always a guarantee. And for the Habsburgs it became a serious problem.

The birth of Balthasar Charles was particularly welcomed by his parents. King Philip IV of Spain had married Elisabeth of France, the daughter of King Henry IV and Marie de Medici, in 1615. Elisabeth had been just thirteen years old at the time, while Philip was 16, so the pair were probably forbidden from sleeping together until they had grown up a bit. Their first child, a daughter named Maria Margaret, was born in 1621. Sadly she died two days later.

Over the following years this firstborn girl was followed by four more girls. None of them lived to see the age of two and most died within days or weeks of birth. The arrival of a son in 1629 was welcomed but his parents must have anxiously held their breath to see if he would be as sickly as their daughters. Luckily for them he lived to see his first week, then his first month, and then his first birthday. 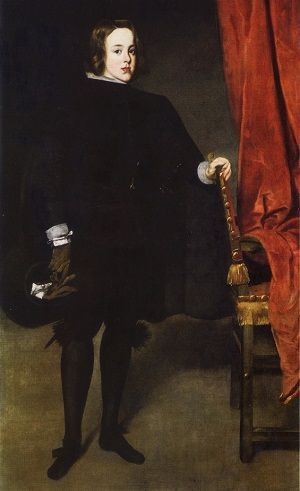 But sadly Balthasar proved to be an anomaly. A brother, Francis Ferdinand, was born and died in the same day in March 1634. Three more daughters and another boy were born between 1636 and 1644 but only one, Maria Theresa, lived.

But while his siblings were all failing to thrive Balthasar was growing up. His first governess was the Countess of Olivares, whose husband was a favourite of King Philip. Once he was a little older he would have been handed over to male tutors to be given an education fit for a king. King Philip was fluent in French, Italian and Portuguese and would no doubt have insisted that his son at least learn Portuguese since the country was their closest neighbour. He may even have learned French through his mother.

At just two and a half years old the little prince was taken to the Castilian court and formally recognised as heir to the throne. At the age of sixteen, in two separate ceremonies, he was sworn in as heir to the kingdoms of Aragon and Valencia, and a year later a similar ceremony was held in Navarre.

Suggestions for a future wife rolled in while Balthasar Charles was still a child. One potential candidate was Mary, Princess Royal. This young lady was two years younger than the Prince, and was the daughter of King Charles I of England his wife Henrietta Maria. The pair were related, Henrietta Maria was the sister of Balthasar’s mother Elisabeth. King Charles had originally been hoping to marry Balthasar’s paternal aunt Maria Anna, but the match had fallen through due to the differences in religion.

And ultimately the religion issue soon scuppered any hope of this match too. Charles could not agree on his children converting away from the Protestant faith (although it would have thrilled their mother), and King Philip could not allow his son to have a wife who was not a committed Catholic. Mary instead was married to the extremely Protestant William of Orange, and Spain was left to find someone else.

However, there was a bit of a shortage of royal brides at the time. In France the Queen was King Philip’s sister Anne, and she and King Louis XIII only had two surviving sons. The Portuguese royal line had died out and left King Philip’s grandfather as monarch, so Philip himself was King of both Spain and Portugal. He was also the King of a unified Spain so that ruled out turning to the Aragonese royal family - his was the royal family of Aragon, and Castile!

As usual the choice fell within the family. Over in Austria the other Habsburg line had produced one surviving daughter - Maria Anna. This Archduchess was a first cousin of Balthasar as her mother was his father’s sister. But this wasn’t a problem to anyone, in fact it was practically encouraged.

In the summer of 1646 the betrothal was made official. It had been an exciting 12 months for the teenage prince as it came after the celebrations to mark him as heir to Aragon, Valencia and Navarre.

Balthasar returned to Zaragoza with his father several months later. In October he took part in a public ceremony to mark the second anniversary of the death of his mother, Elisabeth, who had passed away in 1644. The prince fell ill that same night and the next day was diagnosed with smallpox. He rapidly went downhill, dying on the 9th October.

Philip was devastated. The death of his son left him with just a daughter, the Infanta Maria Theresa. Two years after his sons death Philip remarried. His bride was his fourteen year old niece, and Balthasar’s betrothed, Maria Anna of Austria. Unfortunately for the Spanish royal family this additional round of inbreeding would lead to their line dying out in the next generation.

The previous Almost King was Joao Manuel of Portugal.