In the 17th century you couldn’t throw a stone without hitting a royal prince called “Louis”. As a result the figure in this blog post is going to be referred to by the name "Young Louis" or "Petite Dauphin", otherwise you’re going to get sick of the name while reading it and I’m going to get lost while I write it.

This Louis was known as the “Petite Dauphin” while his father, also called Louis, became known as the “Grand Dauphin”. There weren’t many French kings who saw their grandson grow to adulthood in their lifetime but in the case of King Louis XIV he had married young and he lived a long life, while his son also married quite young. 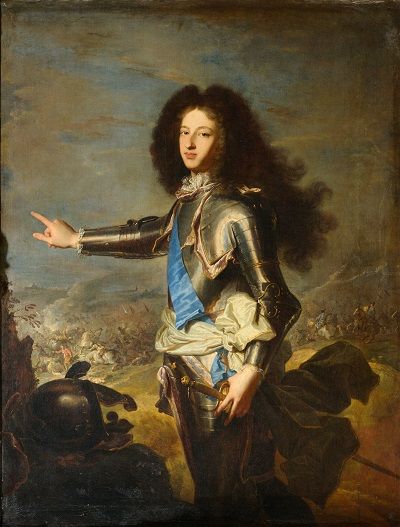 The Petite Dauphin was born in August 1682 in the Palace of Versailles. His parents had married in 1680 and he was the first of three children with Philippe arriving in December 1683 and Charles making a trio of sons in July 1686.

Their parents' marriage was not particularly happy. Their mother, Maria Anna Victoria of Bavaria, was charming but allegedly not particularly attractive. She was also frequently ill but her father-in-law had a constitution of an ox and struggled to recognise or sympathise with illness in others. Maria Anna was accused of hypochondria and instructed to leave her apartments and perform the court functions of one of the highest women in the land, but it was not a role she was able to properly play.

The Grand Dauphin had married her for duty and while he was pleased to have secured the line of succession so thoroughly he doesn’t seem to have been too bothered about his wife. He had several mistresses and left Maria Anna to her physical and social isolation.

Maria Anna died when the Petite Dauphin was a child of eight. Her final illness continued for a number of days, which meant that there was time for the Petite Dauphin and his brothers to be brought to see her for a final blessing. But although his father was still alive, his upbringing was primarily at the command of his grandfather the King, who also arranged his marriage.

In 1696 Marie Adelaide of Savoy joined the French court and a year later she and the younger Louis were married. He was fifteen but she was just twelve years old. As a result the King commanded that the pair live apart and only see each other occasionally under supervision. The Petite Dauphin chafed at these restrictions, feeling that as a married man he should now be treated as an adult.

While his wife had to grow up physically, Young Louis had to mature mentally. In 1702 he was twenty years old and admitted to his grandfather’s High Council, where he became privy to state secrets and decisions. This could be seen as a type of formal training for a future King. His father hadn’t been granted this privilege until he was 30 so this early acceptance of the grandson might suggest he was a more promising figure than his father. Or perhaps the King had to acknowledge his grandson growing up sooner rather than later.

It may have been around this time that the young married couple were finally allowed to cohabit. After two miscarriages in 1702 and 1703 a son, typically named Louis, was born in June 1704 and was given the title “Duke of Brittany”. Sadly the little boy died before his first birthday. A second son, also called Louis and also given the same title, was born in January 1707.

In 1708 France entered the War of the Spanish Succession. The Petite Dauphin was sent out to Flanders to serve with the Duke of Vendome and gain some military experience. Unfortunately the event was a disaster. Young Louis and Vendome clashed repeatedly and struggled to make any effective decisions. After defeat at the Battle of Oudenarde he was recalled to Paris. He was a humiliated young man.

But returning to court also meant a return to his wife. A third son, once again called Louis and given the title “Duke of Anjou” was born in February 1710. Unlike his father the Young Dauphin doesn’t appear to have taken any mistresses, he certainly didn’t father any illegitimate children, suggesting that his marriage to Marie Adelaide was more successful than his parents one had been.

And then in 1711 everything changed. The Grand Dauphin, who had been happily living with his mistress, contracted smallpox. On 14th April he died at Meudon and suddenly it appeared that the French throne would skip one generation. The death of an adult male heir would normally be a disaster, but because King Louis was a great-grandfather with two more generations of males following him, all appeared relatively secure. The Petite Dauphin was now the next in line for the throne and would become King Louis XV on the death of his grandfather.

Less than a year later, in February 1712, Marie Adelaide fell ill with a fever. It soon became clear that she had contracted measles. The only treatment was bleeding her, which quickly made her so weak that it destroyed any chance she may have had of fighting off the disease. She died on 12th February.

Louis was a dedicated husband. Before measles was diagnosed he had refused to leave his wifes sickbed. Although the causes of measles weren’t understood it was known that it was highly infectious, so when Marie Adelaide’s spots developed he was kept away from her rooms to prevent him becoming infected. No one could have realised that it was a precaution that was already too late. Soon he was also sick, and just six days after his wife’s death, the Dauphin also died. A joint funeral was held for the young pair at St Denis on 23rd February.

The epidemic continued. The little Duke of Bretagne, their eldest surviving son, also developed measles and died on 8th March. Their last child, the two year old Duke of Anjou, also fell ill. But his governess removed him from the nursery, barricaded herself in her rooms, and nursed him through the illness herself as she recognised the incompetence of the royal doctors.

In less than a year three generations of heirs had almost been completely wiped out and King Louis XIV was left with a toddler to inherit his throne.