Born in August 1198, Alexander II became King of Scotland at the age of 16. Two years later he attempted to take advantage of the chaos caused in England by the revolt against King John, but after John's death led to a change in English leadership the Scots were forced to return home. The Treaty of Kingston was signed in 1217, and in the following years diplomatic efforts led to the still unmarried Alexander being given the hand of the young English princess Joan. 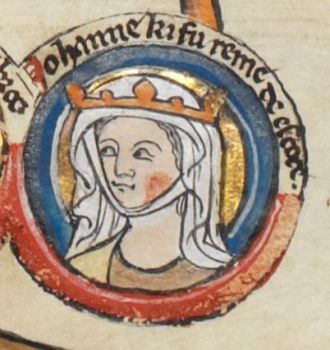 As the eldest daughter of King John of England his wife Isabella of Angouleme, Joan did not exactly have the most stable of childhoods. Born in July 1210, at the age of four she was betrothed to Hugh X of Lusignan to patch up the quarrel caused by John and Isabella's own marriage. Isabella had originally been betrothed to Hugh's father, but the betrothal had been broken in favour of John. The ensuing rebellion and on-going political problems led to John attempting a resolution by giving the Lusignans an English princess.

Joan was sent to be raised in Hugh's household until she was old enough to marry him. But two years later King John died and Isabella returned to Angouleme. In a move that shocked and surprised the English court, Hugh broke his betrothal to Joan and married Isabella instead. The pair then refused to return Joan to England until the new king, Joan's nine year old brother Henry, agreed to pay Isabella's extensive widows dower.

Eventually, after all demands were met and the Pope intervened to scold Isabella, Joan returned to England. She arrived back in May 1220 but she didn't stay there for long. In June 1221 she was married to King Alexander II of Scotland at York Minster. By now Joan nearly eleven years old, her groom was twenty three. Naturally there could be no discussion of children just yet, but Joan travelled back to Scotland with her new husband.

However, as Joan grew up children failed to appear. Scottish records about Queens for this period are very thin on the ground, so it's impossible to say if Joan never conceived a child or if she had miscarriages. Alexander is known to have acknowledged one illegitimate child, a daughter named Marjorie, perhaps he spent too much time with his mistresses instead of his wife. After a while there was some suggestion that Alexander could divorce her and send her back to England. But there was a risk that King Henry would take offense at his sister being cast off and Scotland could not afford a war with it's neighbour.

In September 1237 Joan returned to England at her husband's side so that Alexander and Henry could negotiate a new treaty. As soon as the new treaty was signed Alexander returned to Scotland but Joan chose to stay in England. Instead she travelled to the shrine of Saint Thomas Becket at Canterbury Cathedral, along with her sister-in-law, Henry's wife Eleanor of Provence.

Joan probably intended to return to Scotland, unless she and Alexander had already decided to separate. But she fell ill at Havering-atte-Bower. King Henry and their brother Richard were summoned to her bedside, and she died in Henry's arms on 4th March 1238. She had wished to be buried at Tarrant Crawford Abbey in Dorset so Henry arranged for her to be laid to rest there, and paid for an effigy carved out of marble to be placed over her. Sadly the church and her tomb appear to have been destroyed during the Reformation.

Joan was probably killed by an illness or infection, but it was certainly useful to Alexander that she died when she did. Now he didn't need to worry about causing a war with England – he could remarry and have children without offending his former brother-in-law.

His choice fell on Marie, the daughter of Enguerrand de Coucy. Enguerrand was a notable military commander who had helped King Philip II of France capture English territories in France. Marie was reportedly beautiful, and her father's conquests had made the family wealthy.

The wedding was held at Roxburgh in May 1239. By now Alexander was forty one and Marie is believed to have been around twenty years old. It still took over a year, but by early 1241 the couple were expecting their first, and ultimately only child. A baby boy was born at Roxburgh in September 1241 and was named Alexander after his father. It was a good thing that the boy survived infancy as no siblings followed him.

In 1249 King Alexander set out for the Hebrides, in an attempt to wrest control from the Kingdom of Norway. He fell ill with a fever at Kerrera and died on 6th July 1249. Marie was now Dowager Queen, and could potentially expect a role as Regent or a member of a Regency Council as her son was only seven years old.

But while Marie appears to have had a hand in ensuring that her son was promptly crowned (Alexander III had his coronation a mere week after his father's death) she steered clear, or was perhaps deliberately excluded from, the reins of government. She may have chosen to focus on caring for her son rather than managing his kingdom for him. In June 1250 she accompanied the young King to Dunfermline to celebrate the canonisation of St Margaret of Scotland and to witness her remains being moved to a newly built shrine. But apart from this brief foray into public life she seems to have stayed in the background.

A few months after St Margaret's celebrations Marie returned to France for the first time since her marriage. She now owned property in France that had been bequeathed by her father but she also held her dower lands in Scotland, so she split her time between the two countries. In 1251 she was back in Scotland to accompany her son to his wedding to Princess Margaret of England, the daughter of King Henry III and Eleanor of Provence. The nuptials were celebrated in York over the Christmas season. On Christmas Day Alexander was knighted by Henry, and the next morning he and Margaret were married.

After the wedding Marie returned to her travels between Scotland and France. At some point during 1256 or 1257 she married a second time, to John II of Brienne. John's father had, at various points in his life, been Count of Brienne, King of Jerusalem, and Latin Emperor of Byzantium. But his role as King of Jerusalem had been in right of his first wife, and his reign as Emperor of Byzantium was mostly as a joint Emperor with the young Baldwin II, so his sons had no real claim to either title.

On top of that the younger John was the third of three boys so had little chance of inheriting any kind of royal or imperial role. John's date of birth isn't known, but he appears to have been a child when both his parents died, as at some point he was raised in the French court as a companion to King Louis IX, and as an adult he was made Grand Butler of France. He also married an heiress, Jeanne de Chateaudun, and in 1252 their daughter Blanche was born. When Jeanne died is unknown but it could have been shortly after Blanche's birth.

Marie thus became stepmother to John's only child but it's impossible to tell if they were close. By marrying a second time John may have been hoping for a son, but if so he would be disappointed – he and Marie had no children together. He travelled with Marie to Scotland in 1260, where they were both invited to become members of a ruling council. Scotland had been torn apart by rival factions attempting to control the underage King and a council that included the Dowager Queen would hopefully steady the ship. It wasn't needed for long anyway. In 1262 Alexander was 21 years old and thus considered old enough to rule in his own right. Six years later she and John separated, although neither of them remarried.

Once she was no longer needed on the council Marie returned to her regular trips to France. Her first grandchild, a daughter named Margaret, was born in 1261, with Alexander following in 1264, and David arriving in 1272. Baby Margaret was born in Windsor Castle in England as her mother wanted to be close to her English family, but Alexander and David were both born in Scotland so it's possible Marie was present at one or both of the confinements. She was certainly still actively travelling, in 1276 she even arranged to return to France via England as she wanted to visit the shrine of St Thomas Becket at Canterbury.

Marie's last political and family act came in 1284. Queen Margaret had died 1275, and with three children in his nursery Alexander hadn't felt a need to remarry. But the death of Prince David in 1281 was followed by that of Prince Alexander in 1283 and Margaret, now Queen of Norway, in childbirth in 1284. Suddenly Alexander's only heir was a baby granddaughter who was also the heir to the Norwegian throne.

It was down to Marie to find a suitable wife for her son. She quickly identified Yolande of Dreux as a key contender. Yolande was a step-grandaughter of Marie's second husband John of Brienne. The marriage was soon arranged, with the wedding held on 15th October 1285 at Jedburgh Abbey. Although Marie had been the creator she did not get to join in with the celebrations as she died in Scotland during the summer. Alexander had her buried at Newbattle Abbey, rather than returning her to France.