When George William Frederick, Prince of Wales, became King George III of Great Britain in 1760, he instantly became the most eligible bachelor in Europe.

However the field of candidates was somewhat narrower than it had been for his medieval predecessors. There could no longer be a glorious match with a wealthy French princess or a well-connected Spanish infanta, because the bride had to be a Protestant. As a result George was confined to looking to Scandinavian candidates, and the young women of the German principalities.

Although the field wasn't as broad as expected, George could still afford to be picky. No one in Germany was going to decline to marry their daughter to the King of Great Britain, a country that had the kind of wealth and power that the Landgraves and Electors of the independent German states could only dream of. 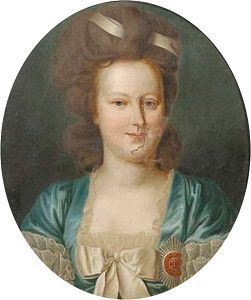 George drew up a list of suitable candidates with the help of his mother, Augusta of Saxe-Gotha, and handed it over to his advisors so they could go and do some research. From an early stage the favourite candidate was Caroline of Hesse-Darmstadt, eight years George's junior and the daughter of Henriette Caroline of Zweibrucken, who was considered to be one of the most educated women in Europe.

Caroline was the eldest of eight children, but despite their large family her parents marriage was not a successful one. Her mother was a patron of writers, musicians and philosophers, and kept up an active role in the management of Hesse-Darmstadt, including an extensive written correspondence with some of the leading rulers of the time, including the King of Prussia and the Russian Empress Catherine the Great. Caroline's father Louis on the other hand was less interested in the thoughtful side of life, and much preferred all things military. The pair appear to have lead relatively separate lives, with Louis living with the military garrison and his wife originally setting up home in Buchsweiler, before moving to Darmstadt when Louis' father died and the pair inherited Darmstadt-Hesse.

Caroline and her siblings all lived with their mother, with regular family visits to their father. With their mother as their main parent it's not surprising that they seem to have received a good education, but it didn't necessarily work out for all of them. Caroline's younger sister Frederica Louisa, who became Queen of Prussia, would later be described as sensible but not intellectually gifted. On the other hand Catherine the Great of Russia, who met Caroline's three youngest sisters, described the two youngest as “intelligent”. Where Caroline fell in comparison is hard to say.

However in the long run this could have worked in her favour. King George was not looking for a wife with a brilliant mind. His predecessor and grandfather, King George II, was believed to have been dominated by his wife Caroline of Brunswick, another highly educated woman with an interest in a range of fields from natural science to literature. British satirists had mocked the King for his wife's abilities, declaring that she was the real power behind the throne. George III was determined that this would not be his fate, and wanted a wife that would not be inclined to meddle in politics – something that a well-educated bride might indulge in sooner or later.

George's agent in Hanover carried out the early modern equivalent of a thorough background check on the various candidates, including Caroline. She was only fourteen at the time, and the news wasn't considered favourable. She was reportedly described by her own mother as being stubborn, with a bad temper, hardly the soothing and supportive spouse that George hoped for. But many of the other early candidates had already been dismissed from the list, either for being scarred by smallpox, for being too educated, or because they were also considered to have significant personality flaws that horrified the King.

Despite all this Caroline might still have won out. She was still young after all, maybe some of her worst personality traits would recede once she gained some maturity. But an extra candidate had been added to the list, virtually as an afterthought – Sophia Charlotte of Mecklenburg-Streilitz.

In her book “The Strangest Family”, Janice Hadlow states that ultimately Caroline's chances were scuppered by her father's behaviour. Louis became part of an unusual religious sect that frequently extorted money from him, and had nearly driven him mad. The thought of a father-in-law who was mentally unstable gave George significant pause for thought, and ultimately led to Caroline being removed from the list. The Mecklenburg princess instead scooped the ultimate prize and became Queen Charlotte of Great Britain, although it's ironic that George didn't necessarily want a clever spouse when that was exactly what Charlotte was.

As for Caroline, nothing had ever been officially announced so she could hardly be seen as being jilted at the altar, something that would have seriously damaged her chance of a future match. It did take a while for a new suitor to come about though, she was 22 when she married Frederick, Landgrave of Hesse-Homburg. Much like her parents the marriage was not a success, they had fifteen children together but spent most of their time apart. Frederick enjoyed travelling, and Caroline spent her time living in a villa she owned near Homburg.

The link with the British royal family wasn't necessarily completely severed though, merely delayed. Decades later, in 1818, her eldest son Frederick walked down the aisle with King George and Queen Charlotte's third daughter, Princess Elizabeth. It's highly unlikely that Elizabeth was aware that if fate had turned out differently, Caroline could have been her mother rather than her mother-in-law.