If you’ve ever spent an afternoon walking around a National Trust property (or even worked for them, as I used to do) then you’ll probably hear a volunteer talking about the previous owners. Most country houses have had a famous or infamous occupant, or a relation of a famous individual, at some point in their history. Although the National Trust is doing it’s best to ensure more women are visible in their house histories, it’s a long process to research And that’s just the National Trust! There are still plenty of country houses that are privately owned and are opened to the public by the family, or owned by charitable trusts dedicated to the preservation of a particular property. 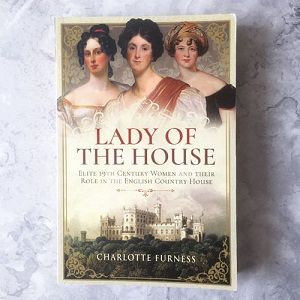 In this book, Lady of the House, Charlotte Furness has collected together the stories of three women. Lady Mary Isham, whose husband inherited Lamport Hall in Northamptonshire (now cared for by the Lamport Hall Trust). Elizabeth Manners, the Duchess of Rutland, who married in to the Manners family and made Belvoir Castle her home (the home is still privately owned by the Manners family and opened to the public). Harriet Leveson-Gower, who transformed the British Ambassador’s residence in Paris.

The book looks at both the lives of the women and the buildings that they transformed. The exception is Harriet Leveson-Gower, who spent a lot of time living in Europe, particularly Paris, as the wife of a British ambassador. But Mary Isham and Elizabeth Manners did invest considerable time and energy in to their homes, transforming in to the properties that we see today. Furness points out how their backgrounds shaped this work. Elizabeth Manners in particular was given control of building and refurbishment work by her husband. Her childhood home, Castle Howard, was significantly grander than Belvoir Castle, which was small and ugly in comparison. Furness points out that not only did Elizabeth transform the building itself but she also had the wider estate renovated as well. A model farm with a dairy was added, and family mausoleum was built in the gardens. Sadly Elizabeth never saw the culmination of her work as she died at the age of 47, her husband had the mausoleum built to her designs and had her remains moved there after it was completed.

My only complaint about this book is the layout of it. Rather than divide the chapters in to one each for the respective ladies, each chapter is focused on key periods of their lives, with all three women falling under each chapter together. So “Making a suitable marriage” looks at each of the three women, their entry in to society, and the three men that they married. In some ways I felt that this meant there was a lot of bouncing back and forth between the three women. I would have preferred to read about each one individually, and then read about how they impacted the grand houses that they ran.

However that shouldn’t be taken to mean that it’s a bad book! I really enjoyed reading it as I feel that the three women were well chosen. They all dealt with individual tragedies, becoming a widow long before expected, or dealing with the deaths of adult children. I particularly liked that the author picked Harriet Leveson-Gower, the daughter of the Duchess of Devonshire (yes, THAT Duchess of Devonshire). Both Harriet and her older sister Georgiana are overshadowed in history by their parents unconventional marriage, and it was lovely to read more about both women. Harriet kept up a frequent correspondence with her older sister so Georgiana features regularly in this book too. I’d love for Furness to write a full biography on these two women.

If you’ve always been interested in the impact that women can have on the renovations of a country estate, or just want to find out a bit more about the lives of nineteenth century upper-class women, then I’d recommend this book as a great starting point.

Lady of the House is available from Pen and Sword. More reviews available on the blog.