This is reported to be one of the last requests that King Charles II made to his brother James shortly before his death. Charles had had multiple mistresses during his life, and Eleanor “Nell” Gwyn was just one of several long-term favourites. But unlike her contemporaries, who had powerful families and connections to protect them after his death, Nell was a commoner who could easily be dropped by her supporters, thus the request that his brother help her after he was gone.

Nell’s origins mean that much of her early life is quite obscure. No one records the date of birth of a brothel keepers daughter, even if the child does grow up to become a King’s mistress. Even her father is unknown, with various names and family connections put forward over the centuries. Her surname Gwyn suggests a Welsh family, but there’s no proof that her mother took this name for any reason other than liking the sound of it. 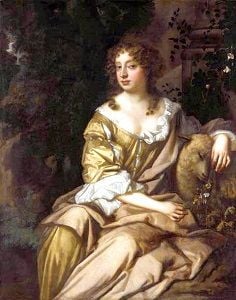 We do know that Nell’s mother was called Ellen, and that Nell had at least one sister, named Rose. She was probably born in February 1650, but a 19th century publication gave the year as 1642, and while London was probably her birth city both Hereford and Oxford have been proposed as well. She appears to have grown up in a brothel, her mother Ellen ran one and Nell herself claimed that she sold drinks to the customers. She may eventually have ended up selling herself too. At some point she moved away from working in brothels and instead began to sell oranges in the theatre, along with her sister Rose.

Depending on Nell’s date of birth, she was just fourteen when she joined her first acting company. King Charles had not only lifted the ban on theatres but had also legalised women performing on stage. Despite being virtually illiterate, she did well in the acting “school” that signed her up. She learned to both act and dance, and may have had her stage debut around 1664. She was definitely in regular shows in 1665, and quickly made a name for herself. To succeed in theatre at the time one had to be physically and mentally tough. Multiple plays were put on in quick succession, which meant that an actor had to have several parts perfected or in rehearsal at the same time. It was hard, demanding work.

But Nell appears to have been talented, becoming a celebrity in her own right. In 1665 she followed the court to Oxford to escape the plague, the King’s Company which was part of was probably hired to perform privately for the court during their self-imposed exile.

In 1667 Nell left the theatre to become the mistress of Charles Sackville, Lord Buckhurst. The relationship was short lived, she was back in the theatre several months later complaining about how she had been treated. But her return to showbusiness brought her back in the orbit of the court. George Villiers, the Duke of Buckingham, was looking for a new woman to entertain the King and distract him from his long-term mistress Barbara Palmer.

It was not an immediate success. Nell wanted to be supported to the tune of £500 a year, and was dismissed as being too expensive. Despite this rough start she still became the King’s mistress some time in 1668. The public quickly became aware that she was the King’s latest paramour, and theatre audiences for her shows increased. In May 1670 Nell gave birth to Charles’ son, who was named after his father. There was never a chance that he would inherit the throne, not only was he illegitimate and his mother a commoner, but he had six half brothers by Charles’ earlier mistresses.

Nell had to share Charles’ affections with another mistress, Louise de Kerouaille. A frenchwoman by birth, Louise arriving in England in 1670 to become a maid of honour for Charles’ Queen, Catherine of Braganza. She quickly became the King’s mistress as well, with a rivalry developing between herself and Nell. However sharp and witty they were towards each other, they also played cards and took tea together, suggesting that they knew the King would soon get fed up with too much in-fighting and could dismiss one or both of them. It amused the court to see them bicker at each other, and amused the King to see them act as friends.

In February 1671 Nell was set up with a nice townhouse in Pall Mall. Her acting career had trailed off by this point. Charles wasn’t a man to sleep with his mistresses and then leave them to go back to his court. He liked to be entertained by clever or witty women, and while Nell wasn’t educated she had plenty of coarse and bawdy anecdotes and stories to tell from her earlier life that no other courtier could match. But although her background was different from Charles’ other mistresses in many ways she was just like them. She sought gifts and money from her royal lover just as the others did. She’s even been described as greedy and grasping, but after coming from a background of poverty who can blame her? And she was considerably less successful than her rival the Duchess of Portsmouth. But while she had less private success than the Duchess she was far more popular with the public. Louise was a French-born Catholic, and as such the target of religious hatred. The story goes that Nell’s coach was once attacked by the public as they believed it was Louise inside. To calm their fury Nell simply stuck her head out the window and shouted “Good people, this is the Protestant whore”. Realising their mistake the crowd dispersed. It’s hard to image any other Royal mistress in history shouting out in such a way.

Nell gave birth to her second son, named James, on Christmas Day 1671. Sadly the boy died in Paris at the age of nine. But young Charles survived childhood. In 1676, aged just 6 years old, he was given the title “Earl of Burford”. One story suggests that Nell held the boy out a window and threatened to drop him unless his father ennobled him. Another story reports that Nell told her son to “come here you little bastard and greet your father” when the King was visiting. When the senior Charles complained about her calling the boy that, she retorted that he hadn’t given her anything else to call him – the Earl of Burford was duly offered as a title. Whether the truth is one of these stories, or neither of them, the son of a King and an actress joined the ranks of British nobility. In 1684 King Charles took the further step of making him the Duke of St Albans and granted him an allowance of £1000 a year.

Nell was granted further property in Windsor, allowing her to be near the King when he was residing in Windsor Castle. Although the Duchess of Portsmouth was the King’s favourite mistress, Nell never left his life like Barbara Villiers did. She was at court during his final illness, along with Louise and the King’s wife Catherine of Braganza. All three women had to be removed from the room at various times due to fainting (Louise), weeping (Catherine), or creating a scene (Nell). His brother James was also present and was given the duty of ensuring the mistresses were provided for, including the beloved ‘Nellie’.

King Charles died on 6 February 1685. His death robbed Nell of her title, she was due to be made Countess of Greenwich but Charles never started the process and James had no inclination to carry the wish through. He did however pay off Nell’s debts and grant her a pension, but it took a lot of nagging from Nell before he made the arrangements.

Nell herself only survived Charles by two years. In March 1687 she suffered a stroke and was paralysed on her left side. She suffered a second stroke in May. Despite this she fought on, only making her will in July. She died on 14 November 1687. Depending on her year of birth she was only in her 30s, with some historians stating that her poor health was caused by syphilis or other STI. Whatever the cause, at her death her only surviving son, Charles Duke of St Albans, inherited most of her property. She also left money to be distributed to the poor and to release debtors from prison at Christmas. She was buried at St Martin in the Fields church. Her descendants continue to hold the Dukedom of St Albans.