Despite living in a small countryside village between the ages of 3 and 25, I never actually joined the local Women’s Institute. Like many I tend to view the WI as the whole “Jam and Jerusalem” thing, a bunch of middle-aged ladies singing hymns and churning out award-winning cakes. But when I saw “Jambusters” sitting on the shelf of my local library something made me pick it up. Maybe it was the fact that it was about the Second World War, a part of history for which I only know basic dates and bits about the “Home Front” that I remember from Middle School history classes. Perhaps it was because it was quite clearly about woman’s role in the war; something which I think tends to be neglected and therefore is worth reading about.

Either way I took the book home with me and got thoroughly absorbed in it. So much so that when it had to go back to the library I promptly bought it off Amazon, and still reread it every so often. 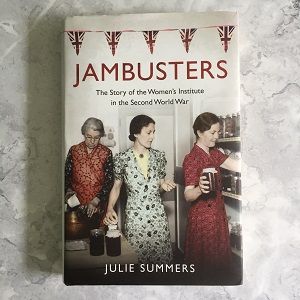 The book starts off with the founding history of the Women’s Institute. It originally came across from Canada, and was created as a way to help women in rural communities come together to develop a bit of a social life, and have the opportunity to learn about a broad range of topics and issues. Speakers would talk about anything, from the history of China to the best way to get bread to rise. The social aspect was important as while the men of the villages could get together for a pint at the pub or the working man’s club, women were a bit more isolated. For those in rural farms they might chat to people on the weekly trip to the market, those in villages would know the women living in the houses around them. But getting out and about for regular visits was difficult, due to time constraints and transport. Many rural houses didn’t have electricity, some didn’t even have indoor plumbing. Laundry was still a manual task for many, and fridges and freezers a luxury that few could afford.

This book gets all this background dealt with in one chapter, before moving on to the Second World War. As men were called up and sent to the Front it was up to women to step in to their places. For women in towns and cities this meant working in factories, hospitals, railways and even signing up to the women’s branches of the armed forces. But for women in the country it often meant taking over the running of the business or farm. Even those women whose husbands were too old to be called up had to step in to male roles, such as delivering the post or teaching at the school.

In the WI the government at the time found a group that was well-organised, with area representatives and local chairwomen for each individual group. This meant that it was easy to get information out through these channels and ensure that everyone knew what was going on. The women of the WI were suddenly expected to effectively prop-up the Home Front and all those who were left in the country, while looking after their own families and potentially dodging bombs.

This book dedicates one chapter to each aspect of the changes in life on the Home Front. Caring for evacuees comes early on as this was one of the first things the government arranged, and many WIs were responsible for creating reception areas, canvassing the locals for rooms to house evacuees in, and taking in a child or two in to their own homes. It then progresses through knitting groups, salvage groups, the all-important jam, digging for victory and everything else that was needed to help keep the country running.

I always knew that a lot of work was required to keep the Home Front ticking over. But as a child it never actually occurred to me that it was women who took on the majority of the work. But they did, because there was no one else and it was through the WI that a lot of it was planned and arranged.
One of the best things about this book is that Julie Summers uses interviews that she had with older WI members as part of her evidence. Along with viewing meeting books at archives, she talked to the women themselves. For many they were able to recount the activities of their mothers and aunts, seen from the perspective of a child, but still valuable as evidence. She covers different counties, different villages, and builds up a great picture of a country quietly working industriously to get so much done, with very little thanks.

If there is one problem with this book it’s that she rarely points out the negatives. The end of the book simply finishes with the end of the war and the advice given to women who were facing the return of husbands and sons. There’s no mention of mental health issues, or the effects of austerity on communities and how the WI reacted. There’s some talk about problems between the WI and government departments, but no mention of any arguments or divisions within WI groups, even though I’m sure there must have been some internal resentments as the years went by. The activities of the women are the focus, but it tends to sacrifice the effects that the pressure had on them.

At the end of this book I felt a great deal of sympathy for these amazing women. Their contribution is often forgotten, I genuinely think most people just assume that civil servants kept everything ticking over, they issued orders and everything just magically happened. It didn’t, it was done by the hands of women, and this book finally tells us how.

Even if you have no interest in the WI, you need to read this book, just to see a bit more about another side of the war.