I recently read “England's Witchcraft Trials” by Willow Winsham, published in 2018 by Pen and Sword Books. 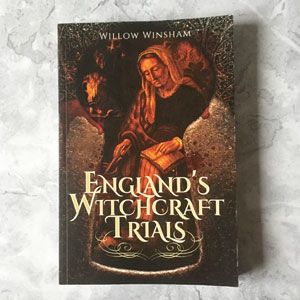 This book arrived just after I saw the Doctor Who episode “The Witchfinders”, which as the title suggests featured a storyline involving witches (which included references to Pendle). Having seen the episode I felt like I could use a bit of an introduction in to the world of English witchcraft trials. I felt like I knew more about the Salem witch trials than anything that had happened in the UK, and that was just through Wikipedia reading.

Happily this book proved to be the perfect introductory text. Winsham has picked some of the more famous witch trials to focus on (although the only one I'd heard of was Pendle), and also dedicated a chapter to two of the most famous “witch hunters” of the time – Matthew Hopkins and John Stearne.
One thing I learned, but which surprised me, was how common accusations of witchcraft were in Essex and Suffolk. Despite living near Colchester, which held the accused witch Ursula Kempe before she was transferred to Chelmsford for trial, I'd never heard about the area's connection to witch trials. A quick Google after I finished the book revealed several websites with surprisingly long lists of names of people in Essex accused of witchcraft. Even Wivenhoe, where I now live, had two women accused. One of the accused was executed for witchcraft, something I'd never heard about before.

I was also intrigued by some of the patterns that Winsham had spotted in the circumstances of the accused. They were inevitably very poor women (and some men), living on the edges of society. They often had to beg from their neighbours in order to survive, or resorted to petty theft. Some of them had illegitimate children. Many of them seemed to have got their “powers” after being widowed, or losing another close family member. Others, inevitably younger women, claimed they were encouraged by “the devil” to kill one of their children. Today we'd consider these to be mental health issues, with the intense stress of daily survival combined with grief or post-natal depression. Although these conclusions are only hinted at in the text, it wasn't an angle I'd considered before. I assumed that the accused were effectively bullied in to admitting what they'd done, which is true enough. Most talk about witchcraft, especially around the Salem trials, focuses more on mass hysteria than individual mental health.

However Winsham is also keen to point out the inevitable bias of our sources for the time. Most of what we know comes from pamphlets written to justify the inevitable execution of the “witch”. Any reading of quotes from the women has to be taken with a large pinch of salt. We can't guarantee what they really said, and many confessions were made after intense periods of sleep deprivation or the promise of leniency if they confessed.

It's essential to remember that the women and men accused were poor and illiterate, and were up against well-connected, highly educated men. In particular Winsham points out some of the later parallels between confessions and more common witchcraft themes found on the continent. This is something only the witch hunters themselves would know, and their inclusion in the accused's confessions show how leading questions could encourage them to admit almost anything. We therefore have to take their admission to seeing the devil or demons carefully – were they forced to admit it, or did a mental health crisis lead to them genuinely believing they had spoken to something supernatural?

If I have one complaint about this book, I feel that the chapters could have been ordered a little better. The chapter about Bury St Edmunds focused more on witch hunters Hopkins and Stearne. I felt that this could have been put at the beginning of the book (for some context for the rest of the chapters) or at the end to draw in the various patterns picked up earlier in the text, and draw it to a close.

However that is only a small criticism and really shouldn't let you be put off the book. I found it to be an excellent read, giving a solid introduction in to witchcraft and witch trials in England, and I'd highly recommend it as a good place for the curious reader to start.