One of the most famous losses to the English throne, Edward the Black Prince was extremely popular for most of his life, but ended it a sick, bitter man.

Born in 1330 Prince Edward was just what the royal family needed. His father, King Edward III, was a puppet king controlled by his mother Isabella of France and her lover Roger Mortimer. Baby Edward was barely four months old before his father led a daring plot, arrested Roger Mortimer and had Isabella put under house arrest. Mortimer was executed and King Edward III now ruled in his own right. 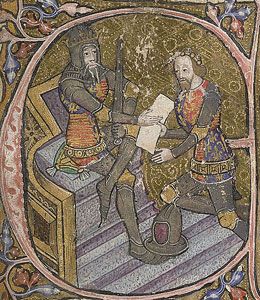 His family were very close, a fact that is primarily attributed to his mother. Queen Philippa had her children all raised in the same royal nursery together, along with a selection of children and infants from noble families. Other children raised alongside the Royal family included Blanche of Lancaster, who married Edward's brother John of Gaunt, and Joan of Kent.

At the age of thirteen Edward was officially named as Prince of Wales, and acted as a "symbolic regent" in England while his father was off on military campaigns. He was granted extensive estates in Cornwall, Wales and Chester, which gave him an income suitable for the household of the heir to the throne. As a teenager his father also began to include him in the numerous battles that were fought in France. He helped win victory at the Battle of Crécy, and was part of the naval Battle of Winchelsea, which helped him gain fame as a great leader and future warrior-king. He developed a reputation as a brave prince, talented military commander and a model of chivalry, as well as an excellent jouster taking part in tournaments as an adult. To many at the time he was the epitome of what one expected from a king-in-waiting, and the bonus was that it came without any of the family troubles that Henry II had faced with his brood of sons.

But in 1361 Edward caused a bit of a scandal by marrying Joan of Kent. Not only did they reportedly not ask King Edward's permission to marry, but Joan was a widow with several children. As the heir to the throne Prince Edward was expected to marry a foreign princess, not an English lady with four children to her name. After a more public wedding ceremony the couple moved to Gascony, where Joan gave birth to Edward of Angouleme and Richard of Bordeaux.

Sadly for Prince Edward his later years saw the shine of glory wear off as England lost numerous military campaigns, and he developed more of a reputation for brutality. He was persuaded to help King Pedro of Castile regain his throne in 1366, and left Gascony at the head of an army in early 1367. Although they were successful, and Pedro was back on his throne by April 1367, the Prince was ultimately betrayed by his ally. Pedro consistently evaded repaying the English their share of the costs of the campaign (Pedro himself had paid for very little, most of the financial burden had been taken on by the Prince). While waiting in Valladolid for the promised money the English soldiers contracted dysentery. The Prince himself fell dangerously ill and never fully recovered. Eventually they returned to Gascony and Aquitaine, having never been repaid by Pedro. Prince Edward had to raise taxes in Aquitaine as he was now facing serious financial problems. This led to problems in the area as the people saw no reason why they should pay the cost of Pedro's broken promises.

Naturally the problems in Aquitaine meant that the French could take advantage of English weakness in the region, and they pressed their advantage. When the town of Limoges surrendered to the French after a siege, the Prince was furious. The English retook the town, and on Prince Edward's orders the people of Limoges were slaughtered. Although Edward had taken part in similar actions in the past, it was this in particular that permanently tainted the memory of him.

Now a sick man who was unable to sit on a horse, Edward's shining reputation for chivalry and an unblemished military record was quickly being forgotten. The prince was in no fit state to try and bring Aquitaine back under control, and so he and Joan arranged to return to England. Their son and heir Edward of Angouleme died shortly before they left, there wasn't even time for the grieving parents to bury their own child.

On his return to England the Black Prince was largely confined to his bed, occasionally being carried to parliament in a litter. He eventually died on 8 June 1376, a year before his own father, leaving his second son Richard of Bordeaux to become King Richard II in 1377.