At his birth Eustace of Boulogne couldn't have hoped to become anything more than a nobleman, like his father and grandfather. He was due to inherit his mother's county of Boulogne, Stephen himself was a younger brother who had married the heiress Matilda of Boulogne, and had taken title Count of Boulogne through her. As the eldest son Eustace could look forward to becoming Count Eustace of Boulogne in the future. But in infancy he gained a new title and new future – Prince Eustace, heir to the English throne. 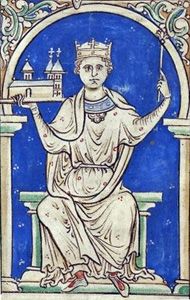 On the death of King Henry I of England, Eustace's father Stephen (pictured right) rushed to claim the vacant throne. There had been many years of confusion over whether Henry would name his nephew Stephen (Stephen's mother was Henry's sister Adela), or his daughter Empress Matilda. But when he died Matilda was in Normandy, heavily pregnant and unable to travel far. Stephen seized the opportunity, in much the same way that Henry had many years ago, and secured the treasury and the throne within weeks of the King's death.

What followed was a period of civil war known as The Anarchy, and as he grew up Eustace had a role to play helping his father. He attended his mother's coronation in 1136 and settled with the court in England, where two of his younger siblings died in relatively quick succession. In 1137 he was in France, where he paid homage to King Louis for his father's lands in Normandy, on King Stephen's behalf. He was back in France again in 1140, this time with his mother, for his betrothal to Louis' daughter Constance. Queen Matilda had played a role in negotiating the marriage, it was only right that she attend the ceremony.

In 1147 Eustace was officially knighted by his father, and began to play a greater role in the civil war, taking part in battles and sieges around the country. When his rival, Henry Plantagenet, arrived to campaign in England in 1149 Eustace was ready. The pair and their forces were engaged in several small skirmishes around the south west of England, and Eustace reportedly even came close to capturing his rival, but Henry managed to elude him. People were looking to Henry as the next king, as the son of Empress Matilda and grandson of Henry I it was felt that he had a stronger claim than Eustace. They didn't want a woman ruling, but they didn't mind her son.

To shore up support and legitimacy for their son, Stephen and Matilda tried to arrange for him to be crowned as King while Stephen was alive. This was common in France, but not in England. Even then it might have been possible were it not for the Pope forbidding the Archbishop of Canterbury from carrying out the ceremony. The best Eustace could get an oath swearing ceremony in 1152, during which a number of nobles gave their allegiance to their future king. Several weeks later Queen Matilda died suddenly at Headingham Castle, and Stephen and Eustace both lost their greatest supporter.

Eustace himself didn't have long to live either. In August 1153 he led a small party on a raid at Bury St Edmunds, where they stole a selection of treasure and other goods from the churches. On the journey home Eustace suddenly took ill and died. It was considered by some at the time to be divine vengeance for his attack on the churches, others claimed that he died of rage after being consistently refused his own coronation. Whatever the cause his death led to King Stephen effectively giving up. Although he had another son still living he came to an agreement with Henry that he would now be his heir.

Eustace was buried near his mother in Faversham in Kent. The family tomb was desecrated during the Reformation, and his remains were lost.