A potential King Arthur of England, young Arthur of Brittany was the son of Duke Geoffrey of Brittany and his wife Constance, and thus had Royal blood in his veins. Geoffrey was the son of King Henry II of England and Eleanor of Aquitaine, while Constance was descended from Scottish kings. Geoffrey died a few months before Arthur's birth, leaving Constance to protect both their son and the Duchy of Brittany. As the grandson of Henry II, baby Arthur was also a potential claimant to the English throne.

Of course Arthur's position in relation to England would have been made highly unlikely if King Richard I had had a son or two. But Richard's marriage to Berengaria of Navarre was childless. However Arthur's claim was unfavourable as he was being raised in Brittany by his mother Constance, who was disliked by Eleanor of Aquitaine and who may have been hostile towards her husband's family. 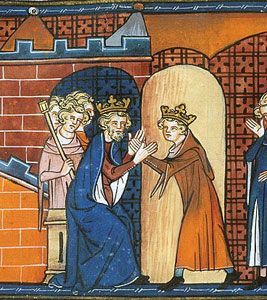 Regardless of Constance's mutual dislike of her in-laws, Arthur was still a nephew of the King of England. Richard even arranged a marriage for Arthur to the daughter of Tancred of Sicily, which came to nothing but does show the influence that the extended family could have over the boy's life. Arthur's older sister Eleanor was also briefly considered as a potential bride for the heir to the French throne as part of an alliance between Richard and King Philip, but again it never came to fruition.

After several years considering naming John as his heir, or naming Arthur, King Richard began to lean more towards Arthur. In 1196 he named Arthur officially and requested that the boy be sent to him so he could be raised by his Plantagenet family. But on the journey Arthur's mother Constance was captured and imprisoned by her husband, and Arthur was secretly taken to the French court and placed in the custody of King Philip.

Despite being raised as a French pawn it may have been that Arthur would have remained as Richard's heir, were it not for his uncle's untimely death. Richard was shot by an arrow during a siege in 1199 and the wound soon turned gangrenous. With his mother at his side as witness Richard named his brother John as heir on his deathbed, not Arthur. It may be that Eleanor persuaded him to do so, or it might have been down to the fact that John was a grown man while Arthur was only twelve years old. Richard's deathbed wishes were not enough to stop King Philip, who immediately proclaimed Arthur as the real heir to the Angevin Empire.

Anjou, Maine and Touraine all declared for Arthur, leading to war in the region as John and Eleanor fought to hang on to the counties. Arthur witnessed several sieges on his behalf, but as John started to gain the upper hand he was moved back to Paris. King Philip treated the boy as a treasured companion for his son and heir Louis and had him educated to the same high standard. But Arthur wasn't the grateful subject that Philip believed him to be. Concern grew that Philip intend to claim Anjou, Maine and Touraine for himself and exclude Arthur from gaining control when he came of age. Instead Arthur fled to the court of King John, once more accompanied by his mother Constance.

It was not a situation that ended well. Suspicious of John as well as Philip, Arthur and Constance never saw John. When their intermediaries failed to negotiate a favourable audience with John they fled straight back to a very angry Philip. Arthur was virtually excluded from the peace talks that followed. It was agreed that he would do homage to John for Brittany, and Philip and John settled various territorial claims between them, as well as arranging a marriage between one of John's nieces in Castile and Philip's eldest son Louis. Arthur would shine in the tournament thrown to celebrate the marriage a year later.

Arthur's greatest ally, his mother Constance, died in September 1201 in childbirth, possibly after delivering twins. In recent years Constance had leaned more towards Arthur's paternal family, but without her advice and influence he moved back towards the French court. Encouraged by King Philip he led an invasion against Poitou. His forces even managed to besiege Eleanor of Aquitaine in the Château de Mirabeau in July 1202, but John quickly marched on Mirabeau. Arthur and his forces were taken unawares. Eleanor was freed and Arthur was captured and imprisoned at the Château de Falaise.

Arthur's ultimate fate is unknown, all that is known is that he was never seen again after 1203. One account is that King John ordered for Arthur to be physically mutilated in some way, either castrated or blinded, and that after his captors refused to carry the act out they killed in fear of what John would do to them for disobeying him. Other accounts state that John himself killed the young man in a drunken rage and had the body thrown in to the Seine. Like the Princes in the Tower several centuries later Arthur's final resting place was never revealed. His older sister Eleanor, also reportedly captured at Mirabeau, would live in to her late fifties and died in captivity in England during the reign of Henry III.