Today's church is a little bit special. My fiancé and I recently purchased our first house, and this church is right in the heart of community we now live in - Wivenhoe in Essex. 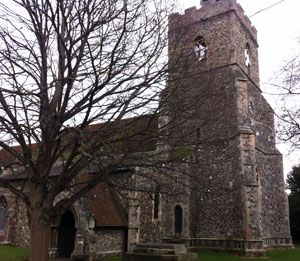 St Mary's in Wivenhoe is an old church with an interesting history. The church has a lot of fragments and pieces of Roman bricks and tiles built in to the walls, and given that Wivenhoe is along the Colne river, a bit further down from the old Roman town of Colchester (Camulodunum), it's quite possible that there was a smaller Roman settlement was in this area. Although Wivenhoe itself is mentioned in the Domesday Book, the church isn't. In fact the earliest recording of it dates from 1254, but since the name "Wivenhoe" is Anglo-Saxon in origin, there would probably have been a church on or near the same spot from much earlier.

The oldest remaining parts of the building are the north and south aisles, which both date from the 14th century. The tower was added towards the end of the 15th century, as was a chapel in the north, and the south porch was added in the 16th century. Sadly though the church doesn't appear to have been well cared for, as by the end of the 16th century the roof was leaking and rain was damaging the building. Although repair work was carried out, parts of the church still had to be rebuilt in 1860, when the church was also enlarged. Wivenhoe had grown in size by this point as the River Colne was so silted up that ships couldn't reach Colchester to unload. Instead Wivenhoe developed as a new port for both trade and shipbuilding, and with a population of around 2000 it was probably felt that a larger church was needed for residents and visitors.

It's a good thing the church was repaired in 1860, as the Colchester Earthquake struck in 1884. If the church was still in need of work then it may have been severely damaged, as it was the worst casualty was the top of the tower, where the battlements along the top collapsed. They were repaired soon after the earthquake, and the last real building work was in the 1980s, when a kitchen space and toilet were built. In the 20th century the bells have also been repaired and retuned, and in 2016 the roof and some stonework were inspected and repaired.

Wivenhoe is a lovely church in the heart of a lovely town. It's amazing to think that it withstood an earthquake, when other medieval churches in the area weren't quite so lucky.