If you visit the city of Lincoln, you won’t be able to miss the cathedral. Standing on top of a hill (the walk up to it is named “Steep Hill” – it’s not an exaggeration!) the cathedral dominates the skyline. The climb up the hill is well worth it though, as it brings you through little medieval streets in to a small square, and the cathedral itself with a medieval gate in front of it. 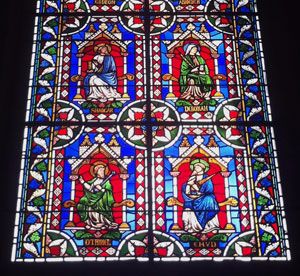 Lincoln Cathedral has had a bit of a history of falling down. The first cathedral was built after the Norman Conquest, with completion in 1092. A fire in 1141 destroyed the roof, which led to an opportunity to expand and rebuild, but an earthquake in 1185 destroyed most of the building. St Hugh of Lincoln was appointed as bishop after the earthquake, and a new period of rebuilding began from 1192.

Disaster struck again in 1237, when the main tower collapsed, probably due to poor support when it was originally built. The loss of the tower gave an opportunity for further expansion, St Hugh’s burial in the cathedral had led to an increase in pilgrim visits, and more space was needed. More building work was carried out in the 14th century, including increasing the height of the central tower to 271.

Lincoln does not appear to have suffered too badly under Henry VIII, although a storm in 1548 did lead to the collapse of the spire that had been raised on the central tower. The worst damage was done during Cromwell’s time, when Lincoln was besieged by Cromwell’s forces. Restorations and new building work were carried out from the mid-17th century onwards, including the building of the Wren Library and the installation of bells in the central tower, which ring every quarter hour. 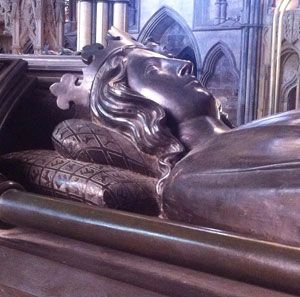 The Victorian restoration led to a new collection of stained glass being installed in the cathedral, especially in the windows along the nave, which show the usual Old and New Testament scenes. There’s also several memorial windows, such as the one dedicated to Robert Parker and Arthur Malcolm Cook, both canons and subdeans of the cathedral.

Multiple Bishops of Lincoln have been buried in the Cathedral, and their carved tombs can be found dotted around the building. Up past the altar you can also find the viscera tomb of Eleanor of Castile, wife of King Edward I. Eleanor died a few miles away from Lincoln and was brought to the city to be embalmed before her remains were returned to London. The embalming process at the time included removing the internal organs, an in Eleanor’s case hers were buried in the cathedral. Her widower had a tomb raised in the cathedral, identical the one built for her in Westminster Abbey, although the effigy in place is a 19th century replica, the original was destroyed in the 17th century.

Another memorial that was damaged during the Civil War, although one that hasn’t been restored and thus is now very unassuming, is the tomb chest of Katherine Swynford. A former Duchess of Lancaster as the former mistress and third wife of John of Gaunt, Katherine’s tomb was raised by her daughter Joan Beaufort, which was buried in a smaller tomb next to her mother. Before the damage the tombs had brass effigies of both Katherine and Joan, and were decorated with their heraldic symbols. Nowadays two plain stone chests, placed end to end instead of side to side, are all that remain.

Lincoln Cathedral has continued to need serious restoration work over the years. The west front in particular has had a lot of work carried out. The cathedral is well worth a visit, a ticket can be purchased for £8 and entitles to you to a second visit within 6 months. Alternatively if you can’t visit but would like to donate to their restoration projects, you can do so here.