There’s a reason why Thaxted church is sometimes referred to as “the cathedral of Essex”. Sited on a hill, and with a tower that’s 181 feet high, the church of St John is far bigger than most parish churches in the area, and as a result it dominates the landscape. 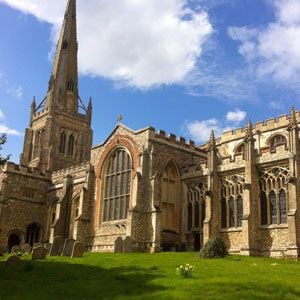 The church was built in the 14th century, although there may have been one on the same site dating from Anglo-Saxon times. Thanks to a nearby Royal hunting lodge the church had more than its share of connections to the English Royal family. Lionel Duke of Clarence, son of King Edward III and Philippa of Hainault, paid for the erection of the south porch. Several generations later a north porch was added, this time arranged and paid for by King Edward IV. There is also a stained glass window with fragments showing a knight, which is believed to be Lionel’s son-in-law, Edmund Mortimer, 3rd Earl of March.

Edmund isn’t the only stained glass fragment, several windows are made up with fragments of medieval stained glass. During the Reformation, stained glass was smashed, as the bright colours were considered to be another symbol of Catholicism. English churches were to be plain churches, and that included replacing the windows with clear glass. In some parishes, the local priest or parishioners would gather up the fragments and either bury it, or store it somewhere for safe keeping. Years later these fragments were rediscovered, and some churches had them reset in to new windows. In most cases the fragments are too small to be used for anything other than a jumble of colours, but in Thaxted some care has been taken to put together the more identifiable pieces. This includes the knight, believed to be Edmund, several saints, and Adam and Eve.

Like many churches, Thaxted was part of the Victorian revival. The biggest evidence of this comes in more stained glass, several windows were replaced with designs by the Victorian glazer C.E.Kempe. One window depicts a series of images depicting notable church donors, including King Edward IV. Another Victorian addition is the largest of Thaxted’s three organs, which was built in London 1820 but moved to the church from St John’s Chapel, Bedford Row in London, in 1858. This organ was restored in 2014, after years of being virtually unplayable.

I also really liked the various memorials that were dotted around the church, particularly the very old ones on the floor. There’s a medieval brass depicting a priest, and one memorial that particularly caught my eye was a grave slab from the 17th century, listing all the deceased children of John Rayner, and highlighting that his wife Elizabeth was the mother of 13!