Despite it being the closest cathedral to me growing up, I finally visited Ely Cathedral in Cambridgeshire for the first time in 2015. What I found was a beautiful building, which after a full Victorian restoration, was left with a visually stunning interior. 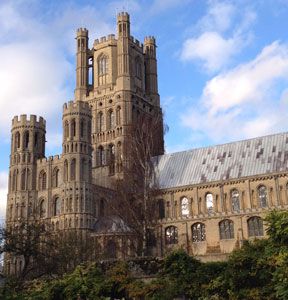 The cathedral was originally founded as a "double monastery", a religious house that had communities of both monks and nuns, in 673 by St Etheldreda, a Princess of East Anglia by birth whose  Anglo-Saxon name was Æthelthryth. Seventeen years after her death her family had her body reinterred in the cathedral in a white marble sarcophagus. Today the spot of her shrine is marked with a slate, and a statue stands in a corner of the cathedral.

The Abbey was destroyed by a Danish invasion sometime in the 800s or early 900s, and was refounded in 970 by a Benedictine community. The Norman Conquest of 1066 led to serious friction between the abbey and the new Norman rulers, as abbey lands were confiscated and monasteries were taken from their Anglo-Saxon abbots and given to French monks. After the Siege of Ely in 1071 the abbey was heavily fined, and left to struggle on. At a time of huge Norman rebuilding of churches and cathedrals, Ely was given less attention than it deserved, until Abbot Simeon was appointed to the community in 1082. Simeon was a Norman by birth, and therefore had the connections to help the abbey regain it's lands. Work on an enormous new building was started a year after Simeon arrived at Ely, based on the cathedral at Winchester, where Simeon had previously lived.

Although building work had to stop and start, following the death of Simeon and political intrigues in the background, the new cathedral began to take shape. In 1109 Ely became a bishopric, an important acknowledgement of it's status. The nave was completed by 1140, and additional works were carried out in the decades that followed. A Lady Chapel was added in the 14th century and the east end was reworked in the 13th. It was also in the 14th century that the central tower collapsed. The cathedral was built on soft ground, and it may have been that the foundations dug for the Lady Chapel had led to subsidence in the tower foundations. The tower was significantly widened, and replaced with an octagon instead of the original square.

Ely cathedral suffered multiple setbacks in the English Reformation. Under Henry VIII the old Anglo-Saxon shrines were destroyed and the stained glass windows were smashed. It was further damaged by the army of Oliver Cromwell, himself a local boy, when they occupied Ely in the 1640s. It was even suggested that the cathedral should be pulled down, and the bricks sold off to pay for treatment for sick people, and pensions for widows and orphans. Instead the land owned by the cathedral was sold off or given away, and the cathedral building itself was left to rot, especially as it's bishop, Matthew Wren, was imprisoned in 1642. 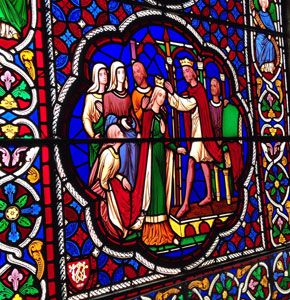 The cathedral went through a revival in the 1700s, with further work carried out in the 1840s, during the Victorian restoration that saw many churches and cathedrals get a thorough makeover. This included creating and installing a series of beautiful stained glass windows depicting Biblical scenes. If you take a camera with you, on a bright day you can get lovely shots of the plain stone floors and pillars bathed in bright colours coming through the windows.

Today both the inside and outside of the cathedral are really beautiful, and well worth a visit. The cathedral also includes a stained glass museum, which displays medieval glass from France as well as more modern installations, and shows the techniques used to create the windows. The actual walk up to the museum (through a small doorway and up tiny winding steps) gets you extremely close to some of the stained glass windows in the cathedral itself, including the image on the right, which depicts the crowning of Esther.

The cathedral also has a wide variety of monuments on display, and if you take a camera you will probably need to bring a spare battery as there is a LOT to snap! You can find more information on ticket prices and opening times on the cathedral website.