In the late 1700's, Charles Langhorn appears to have had a decent enough life for a village labourer. He was married with two young children, living in or near the village of Ashwell in Hertfordshire, and apparently on good terms with his neighbours and well-liked by the community at large. Like many men in rural areas he worked for a prominent local family, in this case he was employed as a shepherd by Elias Fordham.

At some point in late 1800 or early 1801, Charles' brother returned from "the sea" (he may have been a sailor or could have been transported for a few years). This brother encouraged Charles to take two of Elias' sheep and sell them to a man named "Bull", a local farmer. By claiming that the sheep were his, Charles would keep the fee, and presumably split it with his brother. Unfortunately for him, Charles was caught and arrested. His case was heard at Hertford by a judge named "John Heath". Rather than argue the case, Charles admitted his crime, and as a result Heath sentenced him to death.

I stumbled on this sad little case while doing some research on Ashwell at The National Archives. Langhorn was from a lower class than his employer and the judge, but he wasn't completely without friends, and the people of Ashwell lodged an appeal on his behalf. Their surviving petitions, along with a letter from Heath, form the record HO 47/25/43, which is digitised and available to view on FindMyPast. 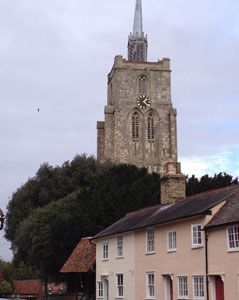 One of these petitions is a letter from the Reverend Townsend Andrews (who had been the vicar of Ashwell for thirty years at the time of this appeal and so clearly knew the family), to his nephew George Baillie, the MP for Berwickshire. The letter dates from 9th March 1801, and states that Charles Langhorn's case has affected the "whole Parish of Ashwell", as Langhorn was "naturally honest, virtuous, sober, industrious and most affectionately attached to his wife and children". Clearly there isn't much time, as Langhorn is due to be executed "on Thursday next". Andrews asks his nephew to speak to "Mr Pitt", and try to get the sentence commuted to transportation.

A second petition was written by Andrews and another man named Samuel Lewin, laying out fully Langhorn's case. They say that he was coerced in to his crime by his brother, who had returned from sea but has since run away. Langhorn's good nature is emphasised frequently; this is his first offence, and he confessed "freely". They also state that he had a chance to escape and didn't take it, while two Constables were escorting him across the fields, they were unable to cross a ditch. Langhorn had already managed to jump over, and instead of running away he came back and helped them across. Their letter ends with an appeal for any kind of clemency; he could be pardoned, he would willingly volunteer to serve in the armed forces, or he could be transported.

Finally a third petition states the same as the second, only this time signed by a series of men from the local community. Right at the top is the man in charge of Langhorn's prison, who states that he has "behaved very soberly and orderly since he has been in my custody". This is followed by the parish overseers; William Barber and John Bull (possibly the same Bull that Langhorn tried to sell the sheep to), as well as two churchwardens, and a selection of Ashwell inhabitants including the chief constable, and a man called Edward Bailey whose name is followed by "the constable who took the prisoner to gaol". Lastly Elias Fordham, the victim of the theft, has also stated that he wishes the prisoner's life may be spared.

The judge though saw things a little differently. His own letter, apparently addressed to the Duke of Portland who was Home Secretary at the time, gives his side of the case. While Heath acknowledges that Langhorn confessed the crime, to him this shouldn't lead to any leniency in his case. His letter states that "it appeared to me that the Prisoner whose crime was aggravated by treachery and infidelity to his Master, and who was not tempted by the [???] necessity of a starving family to perpetrate the offence, was of all the prisoners the most proper object of exemplary punishment". Perhaps if Langhorn's children had been starving, it could have been considered as an acceptable reason for the theft. Heath's letter almost sounds as if his "treachery and infidelity to his Master" is the real crime here, despite Fordham's apparent desire to not see his former servant executed.

Heath further notes that sheep and cattle stealing is "rife" in the area, there are another five men also due for execution for the same crime. In this case he wants Langhorn to be used an example to the people of Hertfordshire; even if it is your first offence, even if you are otherwise a good person - you will be executed for it. He further argues that he can "see no reason to change my opinion. In case of transportation for life he would be equally lost to his family and his country as in the case of his being executed, and the example is not the same".

The actual date of Langhorn's execution is not known. The front of these appeal papers is marked as "unfavourable", and the Capital Punishment website suggests that he was indeed executed, although again the date isn't known.

A quick search of the 1841 census shows several Langhorns still residing in Ashwell, and even more in the wider Hertfordshire area. Although Charles' wife and "young" children aren't named in any of the petitions, it wouldn't be hard to believe that if he was indeed executed, then the community that had appealed on his behalf rallied around to support the bereaved family. The 1841 census shows one John Langhorn of Ashwell, born in 1796, and who would have been five at the time of Charles' execution. It's tempting to wonder if he was Charles' son, still living in the community forty years later.