Today is a resounding Happy Birthday to one of my favourite women in history - Elizabeth Garrett Anderson! She dedicated her life to studying medicine, becoming the first British woman to become a doctor, and then ran hospitals, public health programmes, and trained other women to follow in her footsteps.

Elizabeth was the second of twelve children, and grew up with her parents and siblings in Aldeburgh in Suffolk. Her father was a wealthy business owner, and Elizabeth and her sister were sent to a private girl's school in London. Even in her teens Elizabeth was unhappy with a woman's lot in life - she would complain in later years that her school hadn't taught maths or science. After she finished school she maintained her own education, studying latin in her spare time while helping her mother around the house and looking after her younger brothers and sisters. 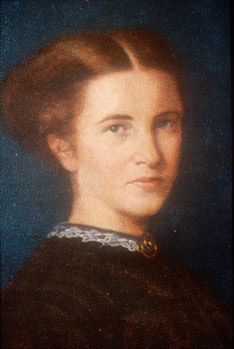 Through mutual friends, Elizabeth came in contact with the social reformer Emily Davies. She also joined the Society for Promoting the Employment of Women, which helped organise a meeting between her and Elizabeth Blackwall, the first American woman to become a doctor. This meeting spurred Elizabeth on to become a doctor herself, and although her father originally disagreed with her plans, he eventually changed his mind and fully supported her.

At the time there was no route for a woman to become a doctor, and all the usual paths that were open to men refused to help a woman.  Elizabeth first trained as a nurse at Middlesex Hospital, and once she had proved that she could cope with operations she was allowed to receive private tuition in Latin and Greek (for correct terminologies and the identification of medicinal plants) and the production of medicines, although the Hospital still refused to let her sign up as a medical student. Her father paid for a tutor for anatomy and physiology, and she was allowed to attend dissections at the hospital, until the male students complained and had her banned from the room. By this time she had taken her first exams and received certificates in chemistry and medicine, but her applications to multiple medical schools were again refused.

Elizabeth was eventually accepted by the Society of Apothecaries, who were not allowed to refuse admission to women. She continued to receive private tuition, although the medical schools were not keen on accepting women, some of their professors were less discriminatory. She received her licence to practise medicine in 1865, after receiving the highest marks in the exam group.

Elizabeth was keen to assist poor women, opening an outpatient dispensary for women and children that saw over nine thousand outpatients in it's first year. She also furthered her studies by learning French, which allowed her to apply for a medical degree at the University of Sorbonne in Paris. More work began to come to Elizabeth's door; she was elected to the London School Board, which controlled the building and running of schools, and became a visiting physician at a children's hospital, but demand for her dispensary and private practise meant that she resigned both positions after a few years to concentrate on her original work. The dispensary became a women and children's hospital, and moved to large premises in Marylebone. She also co-founded the London School of Medicine for Women, the first teaching hospital that accepted women as students.

She was finally accepted by the British Medical Associate in 1873, who promptly pulled the ladder up behind her by changing their rules to state women were not allowed to join. But while some negative rule changes were being made, more positive ones were also taking place - London University allowed women to enrol on it's medical course in 1873. Elizabeth spent the rest of her life working in medicine, along with running her hospital and treating patients, she also passed on her skills and knowledge to the other women who wished to follow her. She married James George Skelton Anderson in 1871, and had three children with him - their daughter Louisa also became a doctor.

In her retirement, Elizabeth continued to set new records for women, in 1908 she became the first woman to become mayor of Aldeburgh. She campaigned for women's suffrage, although she disagreed with the more militant side of things and distanced herself from their activities. She died in 1917, having never seen women's receive the right to vote. But she did see the change in the world after she set a trail for women doctors, as more and more women signed up to medical courses, and found themselves accepted by the institutions who had once said "no".

If you're a fan of Elizabeth you can find her badge here.

If you want to find out more about women in history, check out my eBooks!