One of the things I enjoy about London is the number of small, out-of-the-way museums that are tucked away in random corners of the city. When I moved down here four years ago I bought a book about London Museums, and promptly made a list of those that I would like to visit. Last weekend my boyfriend and I decided to tick another one off the list, and headed out to Clerkenwell to visit the Museum of the Order of St John. 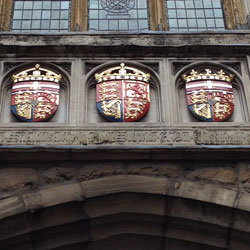 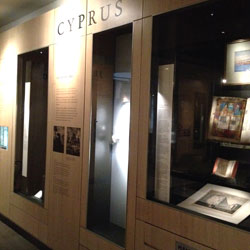 What is the Order of St John?

The old Order of St John was a medieval military order or society that was created after the First Crusade, when a hospice was created in Jerusalem to serve pilgrims that had travelled to the city and fallen ill. As the situation in the area deteriorated, the pilgrims needed military escorts in order to travel through the surrounding area to Jerusalem safely. The Order therefore served to both protect the pilgrims from attack, and look after those who fell sick or were injured.

When Jerusalem fell in the 13th century the Knights moved on to Cyprus and then Rhodes, where they remained for three hundred years before finally relocating to Malta. From both locations the Knights fought frequent battles against pirates and Muslims, but they also continued to run hospitals and infirmaries, where they accepted anyone who was in need of medical help.

In England the Order's work came to an end during Henry VIII's Dissolution of the Monasteries, when the Order's English properties were confiscated by 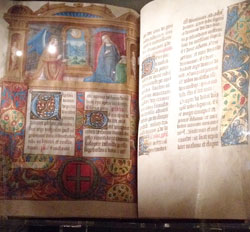 the Crown. However in the 1800s the Order was reformed as a chivalric order, with a new hospitaller organisation created thirty years later. The Order founded a series ambulances, aptly named "St John's Ambulance", which were designed to give members of the public lessons in first aid. The rapid industrialisation in Great Britain had not been accompanied by an increase in helping people work safely, and certain industries such as railways and mines often had high casualty rates. By offering first aid to workers and the public, it was hoped that someone who had been injured could be kept alive long enough to be taken to hospital or seen by the local doctor. It's from this that the modern St John's Ambulance organisation grew.

The Museum of the Order of St John can be found in the old St John's Gate. You simply go round a corner and suddenly find yourself facing a medieval gate surrounded by far more modern buildings. The gate is the only surviving part of the old Priory of the Knights of the Order of St John, and was purchased by the new Order in the 1800s. Although it is mostly a Victorian restoration, it still looks suitably medieval.

You can take part in a guided tour, which I understand shows you more of the building, or you can simply pop in to the Museum itself. There is no entrance fee, but there is a suggested donation of £5 for the tour. Since there was two hours to wait until the next tour, we decided to simply have a look around the museum itself. Going through the doorway takes you in to the gift shop and visitor services area, and we were then pointed through the next door which leads to the display gallery. Following this takes you through the history of the medieval Order, including it's times in Cyprus, Rhodes and Malta, before you then double-back on yourself to past a few videos that tell you more about the Order's revival in England in the 19th century.

Going through another doorway then takes you through to the final section, with a display of artefacts about both World Wars, including displaying their 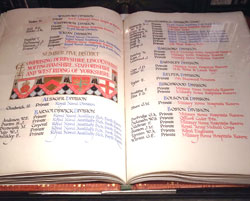 "Roll of Honour" of members who died in the First World War, and more information about the first aid work of the modern St John's Ambulances, including it's work at the eye hospital in Jerusalem and training people in first aid in Africa.

While the Museum was small it was very well organised and the displays were very interesting, for such a small space they managed to pack a lot of information in through a combined of display cases and videos, and using blank wall space to talk about the overall history. If memory serves it's wheelchair accessible through the fire-exit door (although you'll need to ask a member of staff to open it from the inside), and there were toilets towards the back of the gallery. There was also a sign outside about booking the rooms above for events and weddings, and as we were leaving there was clearly a group gathering for some kind of celebration, so you may find it's a bit more crowded at weekends. If you're in the Clerkenwell area and have an hour to kill then I would really recommend visiting this place.