A few months ago while browsing around Waterstones I naturally ended up in the history section. While scrolling through the endless list of biographies on men in history I stumbled upon one of Alison Weir's works; Katherine Swynford. 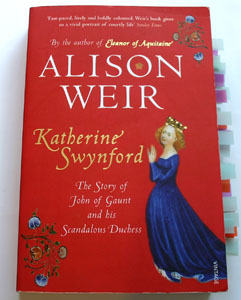 The full title of this work is actually "Katherine Swynford - John of Gaunt and his Scandalous Mistress". I know very little about the medieval period outside of remembering the list of kings and queens and some of the bigger events at the time, so I decided to pick up this book and have a read, and in general I was quite impressed with it.

For those who don't know, John of Gaunt was a younger son of King Edward III of England and his wife Philippa of Hainault. John's nickname "of Gaunt" comes from his birthplace, Ghent in modern-day Belgium. Katherine Swynford on the other hand was the daughter of one of Philippa's servants, she was raised in the Royal nursery and married to an impoverished English knight who was in service to John and his first wife Blanche. In time Katherine became more than just a servant to John.

One of the things that Alison Weir makes quite clear from the start is that it's very difficult to find out much about Katherine Swynford. For example mentions of gifts to her are found in John of Gaunt's registers, but not all of these registers survive. On top of that Katherine and John were very discreet when their affair started, and even when it did become public knowledge it was a scandal, but not as scandalous as later Royal affairs such as that between Henry VIII and Anne Boleyn since John wasn't a King. There's no evidence such as surviving letters or poems sent between them, that could give us a glimpse into the lives of this couple, most of what we know comes from those who were writing against them.

Unfortunately this lack of evidence does take it's toll on this book. If you're expecting to read a lot about Katherine then you'll be disappointed. I almost feel that it should instead have been titled "Gaunt & Swynford" or "The Knight and His Mistress" instead of "Katherine Swynford". Weir has to dedicate a lot of page space to John of Gaunt and his first two marriages, partly to explain the historical context (which was useful since, as I said above, I knew very little) and partly because if she didn't then the book would be half the size it actually is. There really is so little about Katherine that most of it involves careful estimating based on things such as dates of birth of children (even these are estimates due to Katherine's discretion), John's movements as noted by charters and his registers, and general common knowledge or mentions that have seeped down from contemporary writers.

Setting aside the lack of Katherine focus, this is actually a very good book. Weir has a clear way of writing that is easy to read, and her explanations of the political situations at the time are descriptive enough to give you a good idea of what was going on, without being so long that you get bored and give up. She puts forward her own theories about aspects of Katherine and John's relationship, such as when their affair first began, that are certainly credible alternatives to those that have been suggested before.

Overall this book is a really good read. It's not all about Katherine, but you'll certainly come out of it with a greater understanding of England at the time and know more about the couple whose descendants would bring about the Tudor dynasty.